(a review and a giveaway!)

So, I just finished reading An American Marriage by Tayari Jones, and y’all, I legit have a new author crush! I’d heard rave reviews about this book and suffice it to say, they were all true. How could they not be? After all, it was Oprah’s Book Club 2018 selection, and y’all know ‘Mother O’ only picks the good stuff! Still, even as highly recommended as An American Marriage came, I didn’t know what to expect going in. Well, I certainly didn’t expect the book to pull me in so deeply that I didn’t come up for air until I read the last sentence. But that’s exactly what happened.

The plot (spoiler alert), centers around Roy and Celestial (what a beautiful name, right?), a black couple living in Atlanta, who have been married for a year. Roy, is a country boy. Born and bred in Eloe, Louisiana, Roy always had ambitious dreams of a better life. A life he thought he had within his grasp when he met, then married Celestial. Celestial is an Atlanta girl, but not your thirty-two-inch weave-wearing, big, artificial booty-having type. Her father is a millionaire and she’s the artsy type, so much so that she majored in art in college, against her family’s wishes.

The young couple has a nice life going for themselves in Atlanta, but one fateful trip back to Louisiana, changes everything. While staying at the only motel in his Podunk hometown, Roy is accused of raping an older woman who was also staying there. Despite an extreme lack of evidence, Roy finds himself convicted and sentenced to twelve years.

From here, a good bit of the story is told via letters. Letters between Celeste and Roy, which start out hopeful and full of promises from Celestial to hold Roy down and keep her family lawyer working on his case. But then, then there’s a shift. The burden of distance and time starts to break the couple down. And inevitably, after three years of him being behind bars, Celestial tells Roy that she can’t do it anymore.

Granted, we’ve all heard stories (whether fictional or true) about a woman ‘standing by her man’ when he gets locked up, but this story was different. It wasn’t just the prison time that posed an obstacle for the couple, there were so many other issues/factors. There was Roy’s inherent belief that he wasn’t good enough for Celestial. It was an issue when he was a free man, but it became magnified when he found himself wrongfully behind bars. He became obsessed with what the ‘next man’ could give her that he couldn’t. (In this case, he was on to something, because the next man did indeed take his wife!) Then there was Celestial, I mentioned earlier that she was an artsy type, but more than that she was a ‘free spirit’ in every aspect of the words. She didn’t necessarily want to be held to societal expectations, ones that said women had to get married, or had to have children, or had to put her man first. At some point in the book, she acknowledges that she was never really the marrying type. That she probably wasn’t the mothering type, either and that she was just fine with that.

This book touched on so many great themes, societal expectations, marital expectations, motherhood, gender roles, love in all its many forms, the unfair treatment of black men (and PoC in general) in the criminal justice system, and much, much more. I think that’s why this story pulled me in so deeply, because it was just so multifaceted, so layered. On the surface it appears a love story, a tragic one, but when you read it you have the pleasure of seeing that its more. So, so much more.

I am now a Tayari Jones STAN, y’all!

Because I enjoyed An American Marriage so, so much, I’d like to give away a hardcover copy. Enter the giveaway by sharing the link to this blog post on Facebook and using the hashtag #ZipDotCom. Winner will be announced on Oprah “Zip” Bradford’s author page!

(a review and a MTWF)

Read on for my review of Tyler Perry’s Acrimony, but be advised, there are major spoilers in this review! 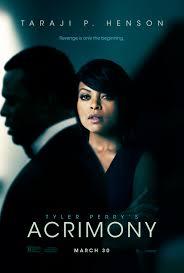 I was finally able to catch Tyler Perry’s latest film, titled Acrimony, starring the eclectic, gorgeous Taraji P. Henson. This movie was so good. I read on Taraji’s Instagram that they shot the film in just 8 days—8 freaking days!—in my hometown of Pittsburgh, Pennsylvania and couldn’t believe it!

In Acrimony, Taraji plays a woman scorned and before you roll your eyes (like I did initially, when I first heard about the movie), please know that you’ve never seen a woman scorned portrayed as intensely as this. Without giving too much away, here’s a short summary of the plot:

Melinda (Taraji’s character) meets Robert, the man who will ultimately become her husband, in college. When Melinda’s mother dies, Robert is there for her, despite their relationship being pretty premature. Ignoring her sister’s warnings, Mel tells Robert that her mother left her the family home and $350,000 from a life insurance policy. Suddenly, Robert is ‘down bad’ and needs help with everything from buying a car, to paying tuition for the last couple of semesters of school. In between spending all of her mama’s money on Robert, Melinda catches him cheating and rams her car into his RV, resulting in no injury to Robert (of course not), but extreme injury to herself. As a result, she has to undergo a full hysterectomy at the tender age of twenty and will never be able to have kids. In spite of the cheating, she marries Robert and continues to pour all her love and all of her mama’s money into him.

Before she knows it, twenty years have gone by and Melinda has two jobs to pay the bills, while Robert stays home, tinkering with a battery that he is convinced will change the energy industry forever. Melinda is content to do this for her man, that is, until it becomes clear that Robert is cheating on her again—and with the same woman (Diane) from twenty years ago. She kicks him out the house and promptly files for divorce, which she gets expedited. In the blink of an eye, their marriage is legally over. Little does Mel know, Robert has finally sold his battery, and for hundreds of millions of dollars.

A few months later, Robert comes to Melinda’s job and gives her roses and a check for ten—yes, ten—million dollars. He apologizes for asking so much of her over the years and also acknowledges that he could never have achieved his dream without Melinda supporting him the way she did. Because she never stopped loving Robert, Mel assumes that this kind, grand gesture means he wants to get back together. She shows up, unannounced, at his posh new penthouse, only to find him there with Diane (AKA ol’ girl that she caught Robert cheating with not once, but twice), who tells her that she and Robert are engaged to be married. Not only that, Diane is pregnant with Robert’s first child.

This startling news causes Melinda to spiral and turn woman scorned. She does all the typical woman scorned stuff (causing trouble at his job, going after his money, stalking Diane online and making threats from a fake page—you know the spiel), but it’s still entertaining to watch because of Taraji’s naturally colorful personality. She has this way of acting out a scene in a way that no one else possibly could.

I won’t give away the ending, because I’ve given away darn near half the movie already, but I will say it’s a bit predictable. I guessed how the film would wrap up, and you probably will, too.

Not surprisingly, Acrimony received mixed reviews. Some people thought it was pure trash, while others, like myself, thought Taraji did her thing. I personally enjoyed this movie, because it sparked a great dialogue between me and my friends. After seeing the film, we went for dinner and I posed this question to them: Say you were Melinda/Taraji, in the same situation, would you have been content to take that 10-million-dollar check and move on with your life? Two of my friends said yes, or more accurately, “HELL YEAH!” The third said “no,” she felt she/Melinda/Taraji was entitled to more than 10 million dollars, since she was the one who bankrolled Robert’s research and materials to put together the prototype that got him his big payday.

Then, they asked me the same question.

I replied that I was torn. Why? Yes, Robert had given Melinda a hefty sum of money, but that was nothing compared to how emotionally bankrupt she was after loving him for twenty years and getting nothing in return. We women are emotional beings. You take that away, without replenishing it, and all bets are off. So, on one hand I could understand Melinda going crazy. She didn’t go crazy because Robert hit the financial Jackpot after she divorced him, she went crazy because now that he’d achieved his life-long dream, he was free (and willing) to be a lover, a partner, a husband to another woman. That was a slap in the face to her, the woman who had spent 20 years going to bed alone, not getting the amount of sex or affection she craved, and not to mention working two jobs to support a grown-ass man. You don’t get to just emotionally bankrupt a person, to take and take and take and take, then go on about your merry life without any problems. And Robert learned that the hard way!

So, I’m sticking with my answer: I’m torn. I don’t know if I were in Melinda’s shoes that I would have taken the 10 million and went on about my business. The Gemini in me might not have been able to let that ride. Or maybe I would have. What say you?!

Movie to Watch For (MTWF)

Sorry to Bother You, in theaters next month, stars Lakeith Stanfield, everybody’s favorite skinny, tall, actor! You might remember Lakeith from blockbuster movies like Get Out and the Tupac biopic, All Eyez on Me, or even the TV show Atlanta that he stars in alongside Donald Glover AKA Childish Gambino (starts humming “This is America”). With Lakeith’s already impressive résumé and the fact that this movie also stars some of black Hollywood’s elite (Danny Glover, Omari Hardwick, Tessa Thompson, and Terry Crews), this is most definitely a MTWF! 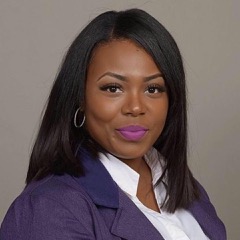 Kiarra M. Taylor is a proud Pittsburgher who currently resides in San Jose, California. She is a mother to a handsome son, as well as a beautiful daughter. A lifelong bookworm, Kiarra began writing in the fifth grade and hasn’t stopped since. Her published works include: A Series of Agains and The Quarter Change. When she isn’t transferring fictional worlds from the dredges of her mind onto her laptop, you can find her nose-deep in a book, or spending time with her children. Ever the social butterfly, Kiarra is very active on social media, so please feel free to catch up with her on Facebook, Twitter, Instagram, and Goodreads!