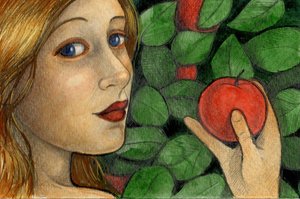 I don’t know if any other woman feels the same way I do, but I often wonder how the world would be different if Eve didn’t listen to the serpent. We all know because of Eve’s sin, now we bear periods and labor pains. Now man has to work because Adam listened to Eve and sinned as well. Because of their expulsion, good and evil was brought into the world.

To Adam he said, “Because you listened to your wife and ate fruit from the tree about which I commanded you, “You must not eat from it, “Cursed is the ground because of you; through painful toil you will eat food from it all the days of your life.

Eve was the first woman on earth, the first wife, and the first mother out of The Book of Genesis. She is known as the “Mother of All the Living.” Eve was Adam‘s wife made from his rib. She was the one who would complete him and share equally in his responsibility over creation of the earth. She, too, was made in God’s image, displaying a portion of the characteristics of God. God created man first known as Adam. With Eve, God brought human relationship, friendship, and marriage into the world when she was created. She was the first woman and first wife. While her accomplishments are great, not much is revealed about her in Scripture. She was made without a mother and a father. She was made by God as a reflection of his image to be a helper to Adam. Together they would fulfill God’s purpose of populating the Earth. Eve was tempted by the enemy when he deceived her into doubting God’s authority. The serpent urged her to focus on the one thing she couldn’t have, the fruit from the Garden of Eden. She lost sight of all of the pleasurable things God had blessed her with in the Garden of Eden. When she tried the fruit, the difference between good and evil was brought into the world. She then encouraged Adam to eat the fruit and he obeyed her instead of remembering what God told them. When confronted by God, Adam blamed Eve for making him eat the fruit and Eve blamed the serpent (enemy) for making her do it. Their behavior caused them expulsion from the garden. The lesson to learn from Eve is we must take personal responsibility for our actions and we also has to deal with the consequences of the sins we commit.

TEMPTATION IS REAL and must be kept under wraps in your life. With God on our side, we must have the strength, courage, and wisdom to say NO when the enemy tries to tell us YES. I picked Eve first as an influential woman in the Bible, not because she is the first woman in the Bible, but because of the lesson she teaches us in the Bible. The enemy is real and he is out to destroy. He wants us to go against God’ will. He wants us to sin and be on his team. We should never question God’s goodness. If he tells us no or blocks something in our life, we should obey rather than lean on our own understanding. Time and time again, we question his will when things don’t go our way. We often take a different route because we think it’s better than God’s route just for the simple fact we lean on our own understanding. Often we depend on God’s goodness for what he can do for us, but forget we must give him the glory just for the simple fact God alone is enough. Just that thought alone should make us thankful no matter what’s going on in your life.  Eve taught me God will never stray me into the wrong direction even when the enemy tries to tell me different. His mercy is everlasting, but I am the one responsible for my actions and I’m also responsible if I lead others in my footsteps.